Alex is a passionate, proven and focused salesman who loves a challenge. Teamwork brings out his entrepreneurial spirit and pure optimism for the big picture. Alex takes great pride in the brands he represents and he is a true ambassador of disruptive cloud-based technologies that provide real-world solutions. 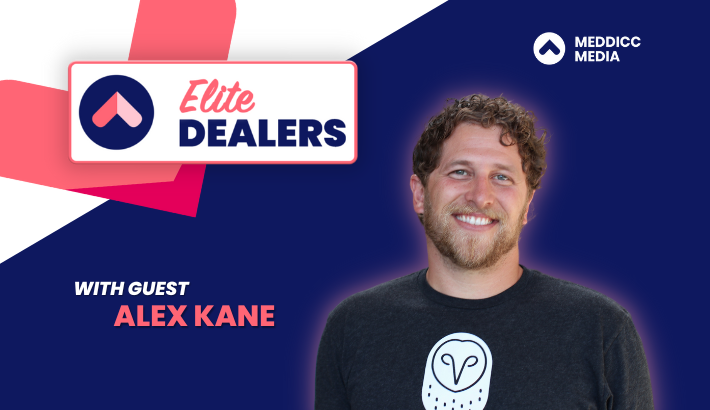 
Alex Kane is a Strategic Account Executive who works with revolutionary cloud-based technologies that help solve real-world problems. He is a passionate, driven, and technical seller, who has over ten years of helping customers work with complex solutions.

To set the stage for Alex’s best deal, you have a food trucking company that has a fleet of thousands of catering trucks - as you can imagine, there is a serious pain that comes with monitoring and reporting on each truck and its inventory. The trucking company operates across the entirety of America, so they are “spread very thin” as Alex put it.

Alex noticed early that they needed an all-in-one platform that could do everything they needed, as opposed to their previous model of multiple systems that gave the whole company unnecessary headaches and wasted time/resources.

"What makes this deal special in particular is that they saw the bigger vision,” says Alex. “They didn’t just do one piece at a time and slowly roll it out - they knew that if they made a shift in this direction, the advantage of the shift is the end outcome.

“Instead of doing it slowly, they went right for it - they were installing vehicles, dash cameras, trailers, temperature sensors, door monitors, all at once. To see the data light up as fast as it did for their magnitude, it was like being fast-forwarded from the year 1995 to the year 2022 in a single moment - it was incredible.”

Implicating the pain came fairly easily to Alex for this deal, and he managed to make the CIO the Champion in getting the deal presented and sold to the key stakeholders within the company. When it became apparent who needed to give the green light for this deal, Alex really could not have picked a better Champion.

“There’s a lot of opinions involved, from “this is very costly… to are we sure this is going to be better than what we have?” which came from people who have never used the system on offer and who were very comfortable with the system they have, even though it gives them trouble, they know it well - anytime there is change, it can be scary, there was a lot of detractors in both directions.

A CIO in the middle, who is pulling them all towards the greater outcome, which is better data, more information, and the ability to see their operation in a brand new way - in a lot of ways, they were flying blind and never knew there was anything better out there until we showed them what it could be like. We took our time, it wasn’t something we were trying to rush them on or pressure sell them on, it was about doing something the right way. That went through to the ownership, who approved the project because it wasn’t a deal, it was a partnership.”

How To Handle Post-Sale Engagement

Alex and his engineer handled most of the engagement with the seller, taking the calls, going on-site, and even overseeing installation. There was a big focus post-sale on putting in even more resources, like implementation consultants, client success managers, and technical solution engineers.

“Once we get to post-sale, that’s when we start bringing all the company value and say “let’s measure twice and cut once”, because if we can just get off on the right foot we’re going to reduce the support on this account by 350% because they won’t run into problems as they go, we’re going to set them so there aren’t problems.”

Alex pointed to the way he envisions the outcome, visualizing it and showing it to the customer so that they know where they are going, and as he says: “if they don’t have a clear picture of where this goes, you can’t expect them to follow you.”

Customers cannot often imagine what it is going to be like, so Alex makes it a point to spend more time in a “demo” environment, this trial period allows the customer to see what it is going to be like and allows them to ask more questions like “can it also do this?” and “what if X happens?” - this is where Alex can circumnavigate and solve problems in the presale rather than dealing with them in the post-sale, well and truly nipping it in the bud.

Alex saw this sales cycle last just 6 months, from the initial conversation to finding the pain and getting the stakeholders involved. In this deal, Alex worked with an Economic Buyer group as opposed to one individual, which worked like a board. They were far less interested in the tech, which was left more to the CIO, operations team, and people who use it, the Economic Buyers are more fiscally responsible and want to understand the monetary value of the product.

“What a lot of people miss is spending too much time focused on learning the inner workings of a company and they fail to show them what you can bring as value,” Alex added. “Showing your value is an important piece of the early stage of a project - they need to see it to want to do this, it is an emotional thing, to switch technologies, and if they aren’t invested in it and it’s not something they want to do - odds are it will be a deal that doesn’t happen.”

When preparing for the initial stages of a deal, Alex tailors it depending on the company’s needs. He does add that if you only tell the customer “what they want to hear”, they will miss the bigger picture of what you are trying to do. “I do focus on giving a wide gambit of abilities,” Alex pointed out. He shows where his solution excels, why people are coming to them, and what they do best.

How To Create Continued Customer Success

Alex will use the success of previous customers to help deals go through. “Not everyone wants to be an innovator who takes the risk for their entire industry and who is the first one to do anything, they want to know who’s already doing it and what kind of success they are already having.”

Alex also puts a big focus on “land and expand”, knowing that in deals contracts often pop up after each other. He wants it to be crystal clear that his company is laying in wait, ready to be there for the customer to take over the contracts. There is also the success of creating more opportunity - by fulfilling the need for the budget on the table, more budget will be allocated to continue the success. “The idea of consolidation is at the core of our pitch and our overall value,” says Alex.

It can sometimes happen incredibly quickly, like with Alex’s best deal, or it can be over the years. Alex is very grateful for client success and support teams, who allow Alex to remain focused on the ‘new’ customer while being the supportive focal point for existing customers. “I want to be the point guard,” Alex added, using the basketball metaphor. “I expect to distribute the ball for them when something isn’t going perfectly, I want to be looped in and I want to assist them - I want their experience to be great because I want a testimonial because their neighbor is going to be interested in what they are doing.”

Alex will look at an existing customer like a partnership or friend-like relationship, building off of this quote: “the best time to call someone is when you need nothing at all.” By creating this friendly relationship, naturally, a customer will ask questions like “what else are you doing?” Alex finds so much success through this natural upsell, as opposed to calling up at the end of the month to hit targets or quotas.

There’s a lot of focus on the post-sale team, to continue Alex’s metaphor, the players surrounding his point guard position. Teams like the implementation team (who manage the installation) and a client success manager (who focuses on overall happiness). Alex works in between these two key players to make sure his team wins and the customer has no pain, no problems, and continued happiness that leads to more deals and success.